One of these days you wake up the consumer decided to approach the commercial center (no mall) to see if he saw something in the tail of the sales and take a look at the "new season", putting clothes in August is the one I like the whole year. As is always more fun accompanied I told my grandmother to accompany me, and although he would not buy anything because "a paseico”. At a reasonable hour, after peeling it off the couch "which cupcake" bus ride and arrived at the center, where in a couple of streets the bulk of the stores that I can afford to take shape.

Look man section. Nothing new under the sun and the feeling of feeling poor even in Zara, the little discount had everything. Upon leaving I proposed that we spent in the area of ​​women's take a look… "Grandma you have to put modern", argued. I dropped my heart sank to see that there was absolutely nothing in the entire store that would fit with the wishes / demands of my companion. Or size, or cuts, ni screens, or forms, or styles. While a lot of girls (in Andalusia the name "child" includes any woman from 3 until the 45 years ") running back and forth with hands and heels skirts very cool. My grandmother looked to be contemplating face of Barbie's wardrobe. Although he had sensed her little illusion, trying to break the ice…

– What's up? You see something?
– "Yes, sí, There are a lot of things ... this will have to be great at your mother and your cousin this ".
– But something for you
– No, I get the feeling that there. There are some very nice clothes but I do not go much…
That became clear that Zara options for more mature people are reduced to gifts for younger relatives, even in accessories like bags or foulards. In reality I had the bug I, not having noticed before that the kind of audience looking for the flagship of Inditex He is going the other way. 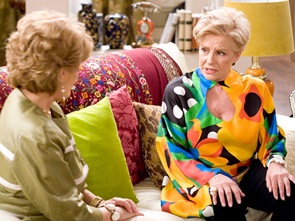 “Vámonos"- I said. Now he knew exactly where to take. Not going to leave her with the bad taste. Although she did not say "mu" I know still coquettish. A smiling Normal Duval gave me the solution. Rome was our oasis point of skinny jeans, provocative shirts and high heels. "Here and surely I find something". as we said.
Then it was I who I was not entirely satisfied with the creative and design proposal Store. I am aware of the huge generational difference, and aesthetic tastes, pero the design of many of those items left much to be desired. I do not think that I only realized, she argued "a maybe it's not as nice as before, but it sure feels good and is good clothes”.
Prudent suits jacket colors (and the occasional round pot), shirts with prints and impossible shine, pullovers and cardigans all with an aura of comfort and good materials that made us suspect that the price will also be higher than the large firm homeland. Cortes adapted to barriguillas that are not always danone, to occasional holsters holster as good life, a laughing waists of wasps and very much in line heights to the medhe. I found a great concept but too "aftertaste" to old.
The textile needs of older women currently serve shops "neighborhood" whose developments regarding moda are always far behind those established in the consumer goods. Let me make clear that I do not intend to wear our grandmothers and girls Physics and Chemistry ... but some "good atmosphere" in style I'm sure that would increase their desire to consume fashion products, in addition to reaffirming their self-concept of beauty, Or you do not see liveliest when they have to get ready for a wedding or formal act? Each person is different, but look handsome think satisfaction is a constant global and intergenerational.
At market level is also a point to consider. In the graduate, one of the teachers – recognized coolhunter- He told us that unot the "Emerging buyers"Was the most important people"mayor”, that "She has money and wants to spend it but you need products that meet their needs”. Needless to say that some other "grandmother" get runway looks for his daring in the mix of prints, tissues or forms and comfort make its spearhead, making occasionally surprised me and say "Ole!” in reality, there are many twenties heart. Although progress continues, as in the case of point Rome, which no doubt many ladies thank, would certainly not bad moderate style modernization oriented garments grandmothers. 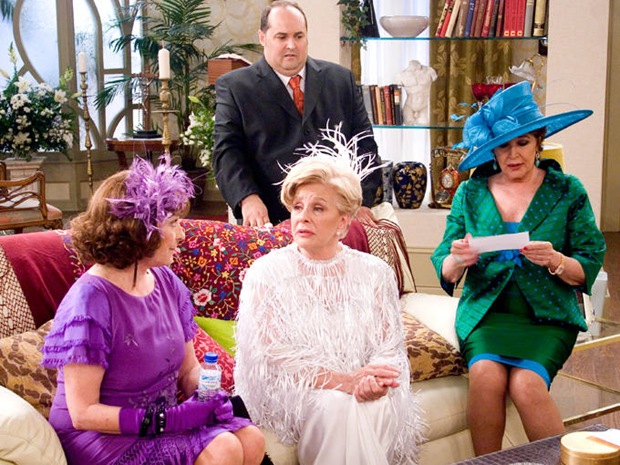 I am sure that the "review" of The Golden Girls, it is the new television TVE proposal for next winter will be an aesthetic revulsion at this level. The great Carmen Maura, Lola Herrera, Concha Velasco and Alicia Hermida I hope to be the bearers of a generation of women who want to continue seeing beautiful and fashionable. For now, the promotional images of the series and give me a joy!
Lola HerreraNorma DuvalPunto RomaTVE
by Yellow Glasses
4 comments