In the past week, in my indiscriminate walk through blogs of moda, trends, theory or even tumblr loaded with gossip gifs; I came across a post that made me stop to reflect. A young man proudly wore a Christopher Kane t-shirt on a traditional street in less luxurious Marbella under the emblem "Fresh like me". It's about Pelayo Díaz, renowned international fashion blogger and designer who has risen to fame thanks to his blog Kate Loves Me. 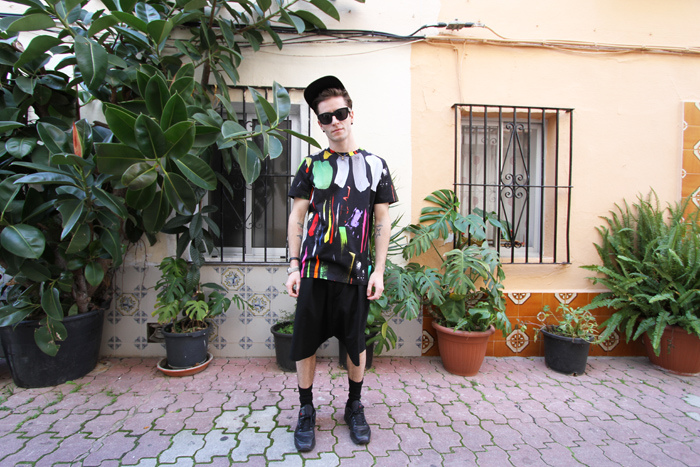 Bueno, you will say, it's not so bad. It's just about the great blogger trick of relocating garments to surprise us, mix churras with merinas, create new trends, take us from Marbella to Memphis in a pee – pas and that we think that they are the most of the most. Untill there, all clear meridian. But my mind wouldn't stop spinning, not only around the photo but in part of the accompanying text:

"It is a magical and inspiring place. So I thought my new Christopher Kane t-shirt would go really well with the city vibe as it was zero pretentious and fun with a Memphis twist. ".

At that moment, a spark lit in my brain and I couldn't stop rethinking myself: What is it that makes this kid - supposedly an expert in fashion by working both inside and outside of it - say that this garment is not pretentious? (Independent, out of curiosity, I have looked for it on the Internet and it is worth € 230). My mind couldn't stop questioning: What is a pretentious garment? How is this claim assessed?

I went quickly to the RAE:

What do they think?

To focus it, i decided ask a number of people I respect and admire within the fashion realm, and let me know your opinion in this regard by transferring the following question: "What is a pretentious garment? ¿Por qué?”.

"Probably some Louboutin type shoes, or the style, with 15cm heel, triple platform and pink patent leather that you will never be able to put on or you will be very uncomfortable despite the € 800 they cost ”. – Diana of By por Dior.

“A pretentious garment is one that tries to imitate high-end garments with cuts, much superior fabrics and / or flourishes. That everything can be cloned, but there are certain clones that cry out to heaven. I think there are really no pretentious clothes if not pretentious brands that sell smoke; or that there is a gulf between your product and communication. Y, por supuesto, pretentious people who make everything they wear look pretentious. Strutting when the clothes actually wear them! – Leticia a.k.a CatyShark from Aragon de Los Fashionpedist.

“Pretentious? one Love and I can not,a garment with linings that wrinkle,a clone of those from Amancio ”- Rachel Gratistotal.

“A pretentious garment is not an Inditex or H&M, since they are very clear about their objective: sell the trend already imposed. But what is extremely pretentious is seeing collections of designers (supposedly) consecrated that are an authentic copy (even though they call it inspiration) of things that we have already seen in, por ejemplo, Dior, Versace, Chanel… En resumen: A pretentious garment or collection is one that claims to have a series of added values ​​and that, finalmente, turns out to be a Zara or H&M but at much higher prices ". – Arthur Gil Bordes from Sadofashionista.

"Fashion itself is pretentious… when clothing loses the simple function of shelter and protection. At the moment when fashion is something external and capable of communicating messages, becomes a throwing weapon for ostentation. I don't think there are pretentious garments in and of themselves, if not people who pretend to flaunt things with them… An attitude to pretentious fashion is to be inconsistent with the context in which you live - Begoña Antón.

“In some documentaries about gardening that Audrey Hepburn made at the end of her life, I learned a quote. George Washington, who was a great fan of gardening, said that there are no weeds in gardens., just plants in the wrong place. Fashion, as a creative activity, has the ability to generate all kinds of garments and clothing with the most diverse shapes and ornaments. From minimalism to the most absolute baroque, any garment can be pretentious out of place. There is no worse feeling than going to an event where you notice that you are overdressed. Pretentious were the party heels tied with an oversized tie at the back at the ankles with which Leti attended the opening of a sporting event a few years ago. And pretentious are also the Spanish actors who confuse their Protestant ideology with stepping on a red carpet (although the Spanish color blindness the ringworm of green) with jeans or sneakers or the absence of a tie. I live convinced that it is not usually the garment that is pretentious if not us using it when we should not, And I think that this belief of mine is to blame for the RAE, which defines pretentious as the quality of wanting to be more than what one is.. – Paco Delgado.

What do i think?

I consider that the pretense resides in the swagger, o no, that there is on the part of the person. There are people who reflect a clear intention to be or appear more than necessary through their attire. I also consider that there are clearly pretentious garments due to their quality ratio. / design and cost, always protected by the "marquitis".

In the case of Pelayo I think it refers to the garment, even being a great designer - and I suppose of great quality - it does not reflect these "values", since it is shown in a more natural and fun way, what makes it "suitable" to walk the streets of classic Marbella. What I do find a bit pretentious is the comment itself, sounds like: "Hey friends, I could go with whatever I wanted but I decided to jump off the bike and choose this simple Kane T-shirt to walk around town because we are all zero pretentious ". Maybe I am very bad thinking ...

What we can conclude from all this is:

1. one Love and I can not, a clone, a useless garment despite its price, or "high standing" garments without really being it, are clear examples that IF there is pretentious clothing as such.

2. Además, it is usually the person himself who manages to reinforce that claim in the garment - or create it – with your attitude or gesture.

Now I only have to ask you