Water is the natural good that allow us to splurge regardless of the consequences. La nueva campaña social emprendida por Acqua for Life pretende que seamos conscientes de su importancia y de la necesidad de dotar de ella a todo el mundo. In our society we are used to not worry about what "we have plenty" - Or so we believe - and why many people are not aware of the waste of water we make every day. La firma Giorgio Armani y Cruz Verde Internacional están realizando esta campaña de concienciación llamada #1dia10litros en la que ha propuesto a varios influencers que realicen el reto de vivir un día completo únicamente utilizando 10 liters of water to raise awareness (ourselves and try to pass on to you what you) the need for actions to help gain access to safe drinking water worldwide.

It explains the organization Acqua for Life "More 800 millions of people around the world face water shortages, es decir: They do not have safe and reliable access to clean water supplies. The only option for many women and children is to sources of dirty water and contaminated, for which, además, must walk, every day, during hours ".

With this premise in mind, the project Acqua for Life has provided since 2011 access to more than 530 million liters of clean water in a 80 communities, in seven countries and three continents. En 2015, They will sponsor projects in Ghana, Ivory Coast, Senegal, China, Bolivia, Mexico and, por primera vez, in Argentina. These countries will join the near 80 communities around the world who already enjoy drinking water through existing projects.

You can collaborate through donations platform type "crowdfunding", to build a distribution network to actual water which is supporting Acqua for Life. Además, this summer an important part of the sales of Armani perfumes will be aimed also to fund these wells. 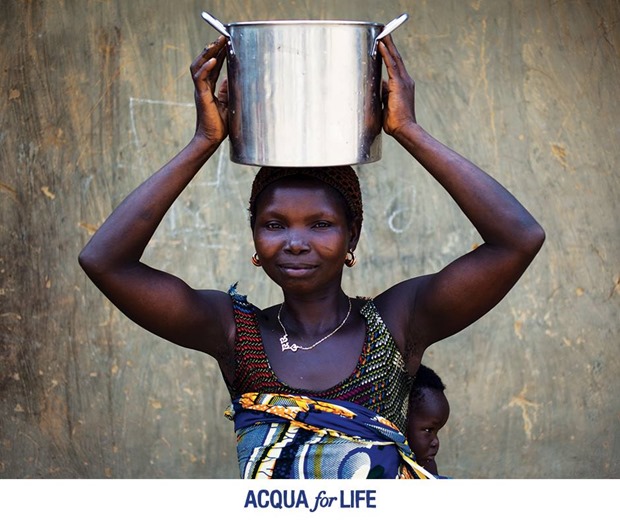 And you will think 10 liters seems much! Si, if they are salmorejo, but without realizing, in our daily life in developed countries we spend an average of more than 100 liter - according to data of Green Cross International. According tweenergy "Each Spanish consumes daily about 171 liters of water of medium, an expense that makes us one of the five countries of the European Union along with Belgium, Luxembourg, Germany and Italy- consume more water per capita”.

For this reason we have "challenged" to document our day with water shortages, and you know that I love to live these experiencias in own skin and to contárosla.

The first thing I had to do to meet this challenge was well be aware of what is supposed to have only 10 liters of water. Giorgio Armani happened to us a carafe with that capability, but still making me a vague idea of ​​what they supposed 10 l, así que the rationed to bring them to measures that controlled daily. I could only spend 5 bottles 2 l. He had some empty home and decided to fill and distribute 3 in the bathroom and 2 in the kitchen. When you see so clear, you begin to realize that it will be more complicated than it looks. I decided to do it on Sunday be a day in "stand by", I do not know if trap, but I was calmer so instead of failing to comply. 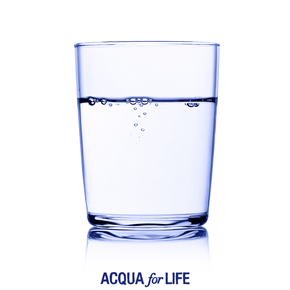 In the bathroom and good morning, and taking all the care in the world, He had spent 1/3 the first bottle of bath by simply washing my face and teeth. After the morning pee, I realize that I can not flush consume a whopping between 8 y 10 l of a single roll! So use one third of the first bottle. I investigate to see if I can afford a shower and is being spent about 95 liter 5 Shower minutes. If Flash could do, as I'm not, I'll settle for a "clean cat" with natural soap giving me only trouble spots with a sponge spending the last third of the first bottle. In less than 15 minutes I spent the first bottle.

Then I turn to the kitchen, and I realize that we have to drink 2 liters of water a day - To be healthy and be like all the supermodels - so I pulled out a bottle. So suddenly. Throughout the day I slowly consuming, within my usual routine. At lunchtime, After washing my hands so express with some water from the kitchen I choose my favorite food, macaroni, in my pan and for a person, add a little less than a liter ... but oysters! Who they stay hard, I have to take a little more. I keep around 1/3 bottle to spend the day and I have to do the dishes .... so I left a culín case, but spending almost the entire water from the kitchen.

After eating, religious visit to the bathroom to make a 42. More than two thirds of bottle was going down the drain leaving the proof of the crime and new washed hands. In Andalusia and gets pretty hot day and a half I realize plants that I have at home are already pouring in missing some joy. I decided to spend a bit of bath water. At night I called to get a drink, to wash up again, I decided to give me another "enjuagón" as I can and "wash my hair" - quickly – spending 1/2 the third bottle. 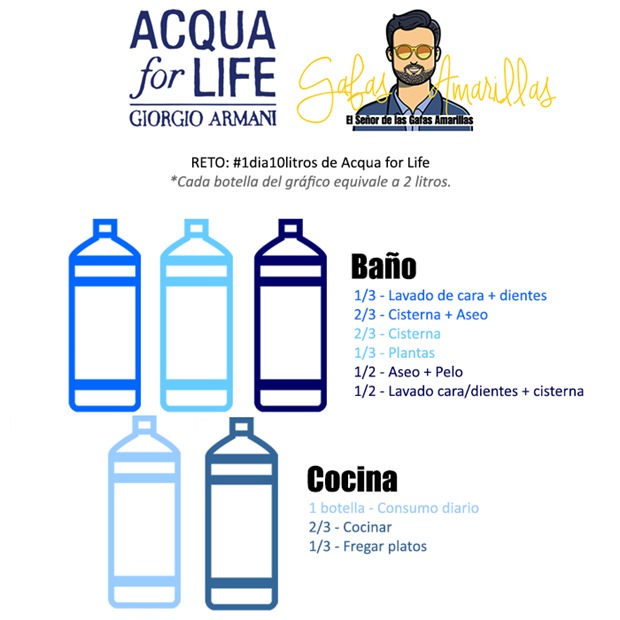 After returning, new washing teeth and face leaving the remaining water from the bottle to return to serve as tanker. Reconozco que I had to squeeze much the belt not to notice the shortage and above all you begin to value so unexpected ways and often silly to spend water.

I believe that actions like these Acqua for Life respond to needs that we ignore as much as we should, it is important to be reminded inequalities and problems which still exist in the world and we ignore that we simply opening the tap. Although it was only one day - and always have in mind that opening the tap no problem everything is solved - He made me rethink many automatic mechanisms that internalize without realizing and make waste water, such as putting the dishwasher with low or leave the tap running while preparing to shower. Although I used to be a conscious person and with this topic, definitely you need ways to continue polishing to become as efficient as possible and above all support causes like these to help all of us to access it.

¿De dónde is Water for Life?

Acqua for Life is a program created by Giorgio Armani in collaboration with Green Cross International that seeks to address the problem of scarcity and water safety, bringing clean drinking water to communities without access to it. Water has always been part of the designs of Giorgio Armani and is the inspiration behind some of his best known works. Not in vain, el agua has inspirado las Fragancias Acqua di Gio y Acqua di Gioia. Desde 2011, when it launched the Acqua for Life initiative, will bring clean water to people in need became a personal priority designer. In previous years, the objectives and activities of the project have been many, both at the level of awareness on the ground itself.

Water For Life, organizes a charity event day 09 July in Madrid Terrace Fox which you'll be one of the assistants if you write a tweet with a picture holding the challenge, asking for your assistance and naming the brand and meUniversoArmani youGafasAmarillas with the hashtag # 1dia10litros. ¿Te apuntas?