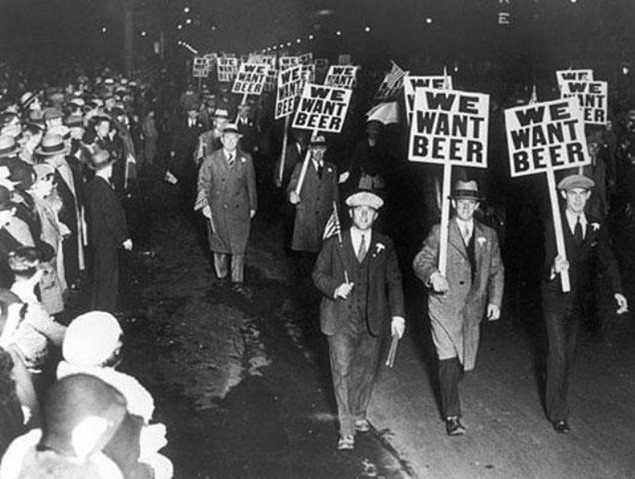 The story of Prohibition surprising curiosities, characters and stories that even the best story could invent.

"Virtue is an acquired voluntary provision, which it is a compromise between two bad ends, one by excess and the other by default » – Aristotle.

It seems that no case had already Aristotle in the United States in the early twentieth century. The exacerbated extreme puritanism and permissiveness confronted in one of the most turbulent and inspiring periods in the history of North America. Gaily 20 They were impregnated feathers, sequins and spirit but If it was forbidden! We discover what, who, how, why especially, some amazing and cool stuff to rediscover on the Prohibition and its subsequent impact.

A shot of history

The so-called "Temperance Movement" was not new in America. Sponsored by religious leaders of Protestant churches, He had been looking for the moderation of the pleasures and the prohibition of alcoholic beverages since the early nineteenth century. The confrontation that marked the arrival of Irish immigrants or Germans - people they "do not like anything at all to drink" (guiño, guiño) – its territories made him even more radicalized. When intellectuals and union leaders joined this request Movimiento`para capar alcohol production, according to them "porque backwardness and poverty caused workers"The necessary political germ was created to close the pipette. It was not until 1917 when the Eighteenth Amendment to the United States Constitution was adopted (You can read the amendment here), along with the Volstead Act to establish the "dry law" in the country, also called "Prohibition". 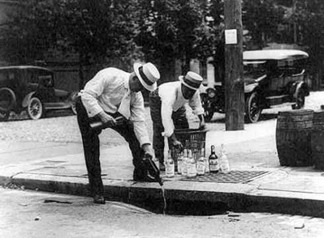 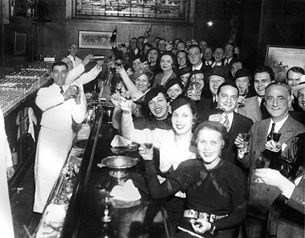 "Manufacture shall be hereby prohibited, sale or transportation of intoxicating liquors within the United States and all territory subject to its jurisdiction, and their importation to the same ". – XVIII Amendment to the United States Constitution 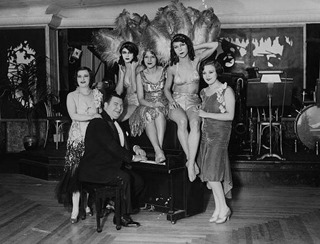 It was then that he began excessive rise of the underground industry, black market, struggles to control distribution territories, mafia activities, the highest prices of prohibited alcohol, bribes and threats. It was the rise of people capable of circumventing the ban and of those called “speakeasy”, which were the establishments that sold alcohol despite the risk.

A late 20 it would be the people themselves who began to think that "the remedy had been worse than the disease"And began blame the Dry Law for increased insecurity citizen. To this was added the side effects of the crash of the 29 that made it necessary for the government to find new forms of financing with taxes. En 1932 Franklin Roosevelt, of the democratic party, confirmed that if elected as president he would repeal the previous amendment. As a detail it should be noted that the Prohibition Law it is the only amendment that has been completely repealed and not modified or revised. The new amendment (XXI) was ratified on 5 de diciembre de 1933 in the US Senate.

A question of names

All history is nothing without its great protagonists. We find a series of names linked to Prohibition that surprise and conquer us: 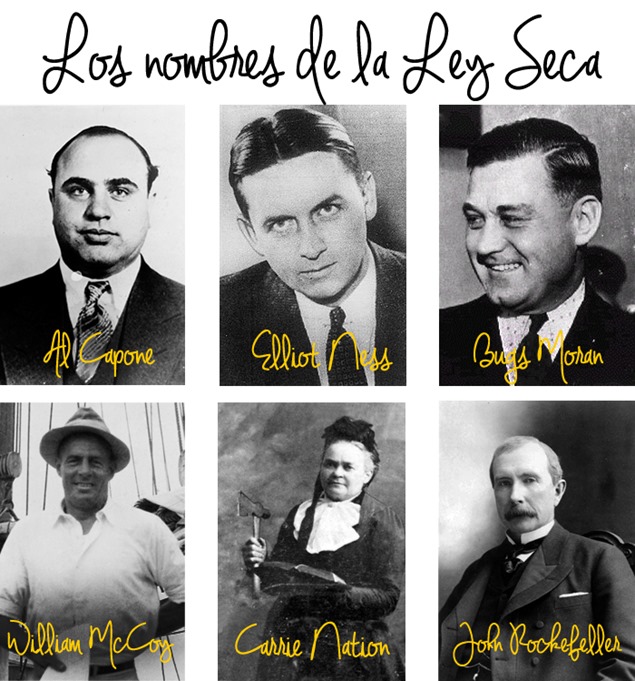 Al Capone: What to say about the quintessential gangster? Over the years 20 would become the most important criminal in the United States, coming to have control over more than 10.000 speakeasys across america. He defined himself, according to your business card, as "Antique seller”. Más info.

Elliot Ness: He was a ruthless American security agent with Prohibition in Chicago. Famous for his anti-alcohol efforts and for his team of hounds nicknamed "The Untouchables”. Know more.

Bugs Moran: A gaster much less known than Capone but just as influential and important. They were tough rivals causing fierce fighting and killing. It is believed that he was in charge of inventing the concept of the shooting.. Más info. (In English)

Carrie Nation: He was the visible and most famous head of the Temperance Movement. His biggest habit was going into bars, with an ax in hand, and break all the bottles of alcohol that he found in his path. As entertainment it is something radical ... although she was for dignity!! She did not live long enough to see Prohibition, but she was its main promoter. He defined himself as “a bulldog that runs at the feet of Jesus, barking at what he rejects”. saturating. If you want to discover more about her click here.

William McCoy: He was a ship captain who became a smuggler during Prohibition. The rest of the maritime smugglers came to respect him because he did not sell the adulterated alcohol, coming to have the “authentic McCoy” label as a true quality label, taking the title of "honest criminal". And without drinking a drop of the product, since he was abstemious! The whiskey was bought from a company in Scotland that continues with its activity, llamada Cutty Sark. Know more here.

John D. Rockefeller: Oil Industry Millionaire. It has force around Prohibition because it supported the ban in 1919 and it would be a key piece in the change of discourse produced at the beginning of the years 30, stating that your opinion had also changed about it. Más info. 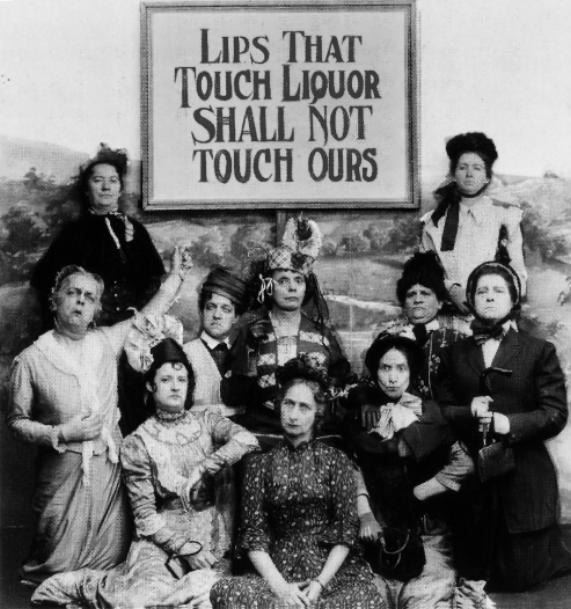 Group of women against alcohol posing in front of a sign that reads: "The lips that touch the liquor will not touch ours" - I do not know if they were aware that the photo probably caused the opposite of what they intended. Would this be the first viral in history?

Details, curiosities and a good juice from History of Prohibition

– His real name is Ley Voldstad. They named him after the chairman of the White House Judiciary Committee at that time, named Andrew Volstead, who supervised its approval. (+ info)

– From Chicago to the world. The law dried up the entire US territory but where it has transpired most has been in Chicago, due to the mythification of his characters as Al Capone. This city was followed by New York as a great city and because NYC cannot stay without being the most ever.

– You could get rid of Prohibition if your doctor prescribed it or were you at mass. Doctors were not prohibited from prescribing alcohol for curative purposes; Likewise, wine could be ingested in religious services. Blessings!

– Close the gates of hell. Although it was a law, those responsible for its realization, like Andrew Volstead made statements like this: “The slums will soon be a thing of the past. All men will walk upright again, all the women will smile and all the children will laugh. The gates of hell closed forever.How wrong they were. 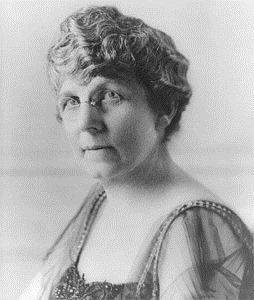 – The combined "La Duquesa". President Warren G's wife. Harding (who voted in favor of Prohibition) served his guests at the White House alcohol obtained from police confiscations. Florence Harding was known as "The Duchess" and it is believed that the actual cocktails made with original mixtures were born in her kitchen while she experimented. (photograph on the left)

– This is a raid! Have you seen that in the movies set in the Dry Law when there was a raid everyone started running? Well, very bad. Customers could sit quietly as alcohol was not prohibited by law, but sell it. The only ones who had to flee through the bathroom window were the waiters.

– Thousands of criminals. According to Wikipedia data, before the ban there was 4.000 inmates in all of the United States federal prisons but in 1932 the number amounted to 26.859 convicts. The Elliot did it for himself!!

– The Birth of the Gangster: The gangster figure, although it had been outlined previously, was born at the same time that the dry law, according to the RAE (Si, the RAE has registered the word gangster) and means: “Member of an organized gang of criminals operating in big cities”. Too bad if you mess around in your cousin's town and they can't call you the gangster! ¿verdad?

– I don't drink, but dollars neither. The government was losing around 500 millions of dollars a year from taxes he stopped collecting on alcohol that was not sold.

– Marketing geniuses have always been. This is how the packaging of some juices sold in the US during the Prohibition said.. They were sold as churros! More or less like DIY kits these days.

“!ATTENTION: the contents of this package must not be put in a clay pot, mixed with 100gr of yeast and eight liters of water, because then an alcoholic drink would be obtained whose manufacture is prohibited ».

– Jazz as an object of hidden desire. The Jazz, booming at the moment, He accompanied the evenings in the prohibited places and inexorably became the cry of a generation as a way of expressing freedom and creation. 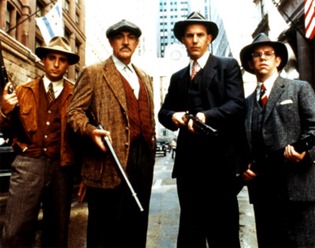 – An inspiring time for audiovisual. According to the IMDB there are more than 500 audiovisual production titles that refer to the United States Dry Law, (Here you can see the list). Among them, the series “BoardWalk Empire” or the movies "Once upon a Time in America" de Sergio Leone or "The Untouchables of Elliot Ness”By Brian de Palma.

– There are still "remains" at the bottom of the bottle. Si, although it seems surprising, in some states USA there are still restrictions on alcohol consumption. We find from the strict laws in some rural areas of Alaska, to avoid suicide; even the "Blue Law" for religious reasons.

– Special edition Cutty Sark: Coinciding with the 80 anniversary of the repeal of the Dry Law, In December Cutty Sark launched a special edition of its 50%. It's been called the "Prohibition Edition" and they've celebrated it with a series of years-long underground parties 20 To celebrate. This information is great for us to have a drink now that we can. 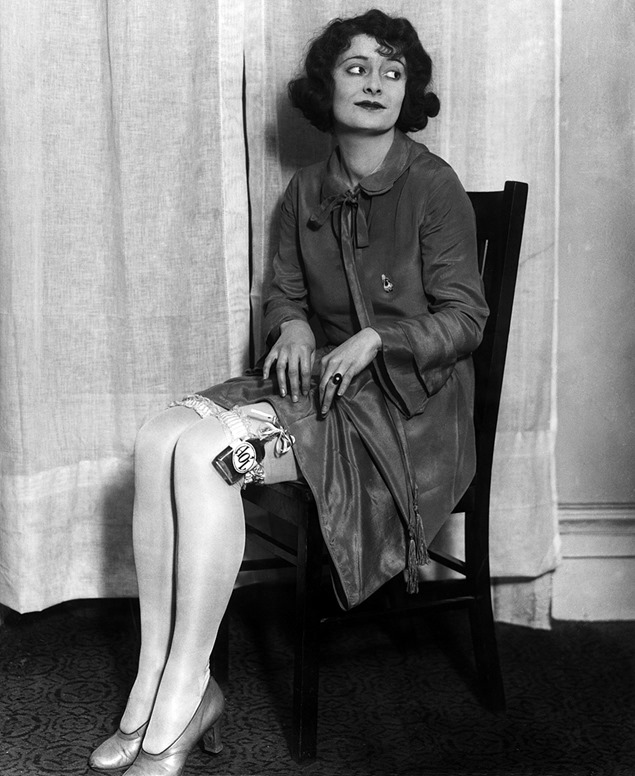 This article of the History of the Dry Law I have done, In addition to telling you all these interesting things that I have discovered, que knowing curiosities is always a must, because I'm dreaming of getting a trip New York Cutty Sark hand and know the original speakeasies. If you also want to experience this adventure you to "rewrite Prohibition" you can become a fan of the Página de Facebook de Cutty Sark, where choose a contest to get the trip for you and three companions. Follow it all under the hashtag #CuttyNYC ¡Cheers!