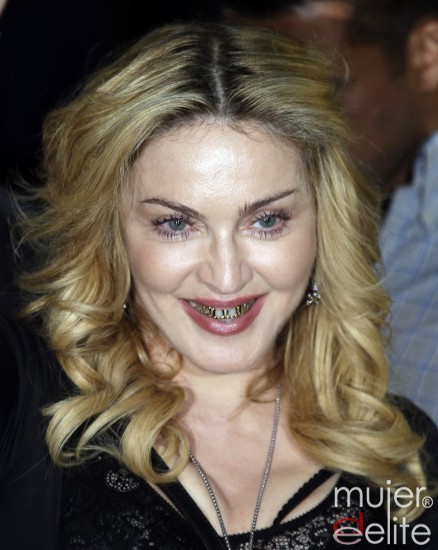 Before taking the decision "not to fly" melted metal detectors five five airport security checks. And it seems quite normal, I see Madonna and, as will, and to whistle, He shouted. I am appalled that the look has become too. And look I like his music since I was little and my sister put her loudly cassette tapes. One thing does not remove the other, of course…

The fact is that Madonna He has had the bright idea, and boy shines, placed a gold trim teeth. That, in some cultures it gives cache and also boast of good social position. But in some cultures, not all. And in mine, but a representative display of his power that it is supposed a lack of taste and a sign of boredom. What need was there that he resplandecieran the piños more than Mr. Clean tiles bathroom? Well, that's: any…

I would really like to see me when approaching the microphone and that begins to engage. Or they have to assemble metal detectors American airports, with how sensitive they are (Americans and detectors, claro), when this lady attempting to pass the security checks. O fails or the buster, I can not think more options.

And that, without entering into valuation photograph published. Really there was something more flattering? ¿En serio? For two other options: or editors who select the images feel like banter, What can be, o The fans do not deserve this look, It can also be!

For the curious, this style as groovy called "bling-bling", something that of course I did not know the cultural issues mentioned above, I imagine it will be an onomatopoeia corresponding to gold glitter when she smiles. In any case, por favor, to reflect .... And fast.