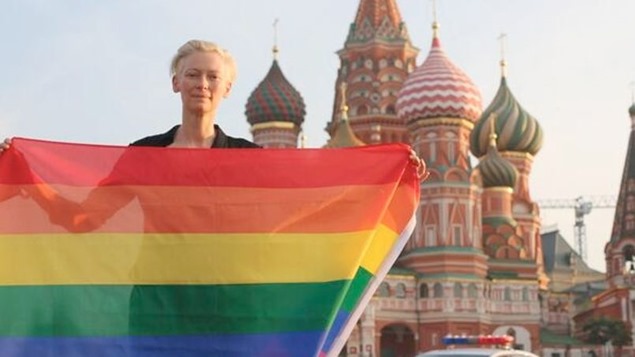 Russia has approved, by absolute majority, a law banning homosexual propaganda, and which claims to be the new moral reserve in Europe.

What they call morality, I call it homophobia and savagery. The funny thing is that from the European Union itself they ask Russia to put aside this absurd and meaningless law. Is Russia prepared to accept the liberal character that has always characterized Europe? Saw it saw it, no. But let's go one step further, all this absurdity does nothing but encourage homophobia in a country, where he 27% of Russians claims that homosexuality needs psychological help and the 5% believes that homosexuality should be eradicated.

I read the news and panic for all gays, lesbian, bisexual, transsexuals living in that country. We are facing a new Inquisition, where people are now persecuted for wanting someone of the same sex. Apparently, in Russia, it is a crime to love. As I said a little higher, this law encourages hatred of the gay community, and we have a clear example in the group of young neo-Nazis  “Occupy Pedofilyaj", that hangs videos on the internet torturing homosexuals who search through social networks. It has recently been learned that one of the tortured youth has died from the injuries sustained.. How far will we go? What's next, the bonfires?

I don't understand how from the UN or any organization that fights for Human Rights allow something like this. These things should not be allowed, never. There are laws that threaten people and should be eliminated. People like actress Tilda Swinton disagree with this law by wearing the gay flag in front of the Kremlin. 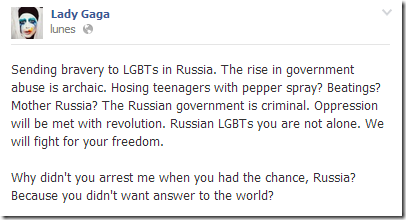 "Enviando el coraje a todas las personas LGBT en Rusia. The increase in government abuse is archaic. Teenagers attacked with pepper spray?  Beatings? Mother Russia? The Russian government is criminal. Oppression joined with revolution. LGBT people in Russia are not alone. We will fight for your freedom. Why didn't you stop me when you had the chance, Russia?  Why don't you want the world to respond?.”

And singer Lily Allen, that has always supported the LGBT community, posted on his Twitter:

"¿Quieres unas olimpiadas anti gays? Tell the IOC to stop LGBT repression in Russia" The link to sign is as follows: https://www.allout.org/en/actions/russia-attacks"

It is true that homophobia exists in many parts of the world, incluso, there are seven countries where homosexuality is prosecuted with the death penalty: Mauritania, Sudan, Yemen, Saudi Arabia, United Arab Emirates, Iran and in some northern states of Nigeria. We are lucky to live where we live, but we should not forget all those people who are persecuted, only, for loving someone of the same sex.
Days ago, read a news story where Robert Mugambe, Zimbabwean President, stated that gays should be punished by castration or beheading. I keep reading news from different countries and I am still amazed by the amount of homophobia that exists outside our borders. Y, as I said before, I still don't understand how they allow people who say outrageous things like Robert Mugambe, rule countries. Hate cannot be fostered, let alone beings of this ilk pour their venom on the people, encouraging hunts of any kind.
But I don't want to end without talking about the good news about homosexuality across our planet: en the state of California has removed the Proposition 8, that prohibited people of the same sex from marrying, y the US Supreme Court recognizes gay marriage. And not only in that country we have advanced a little more, we can't forget about Francia, Uruguay or New Zealand where marriage has recently been approved between people of the same sex.
Whenever I talk about this topic I like to end with a phrase that, for me, it's basic: