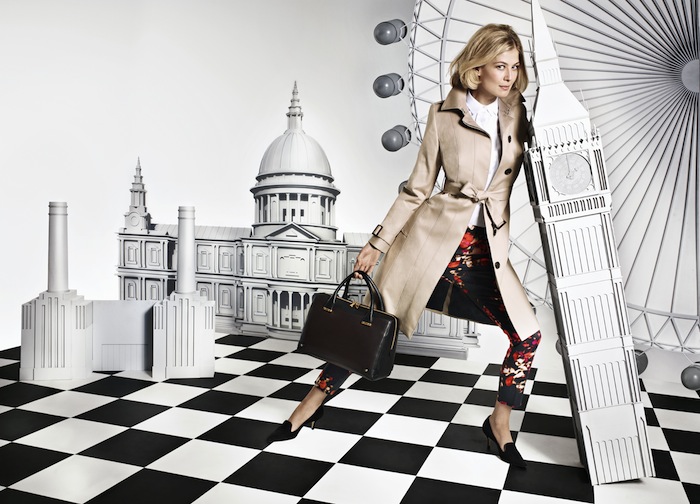 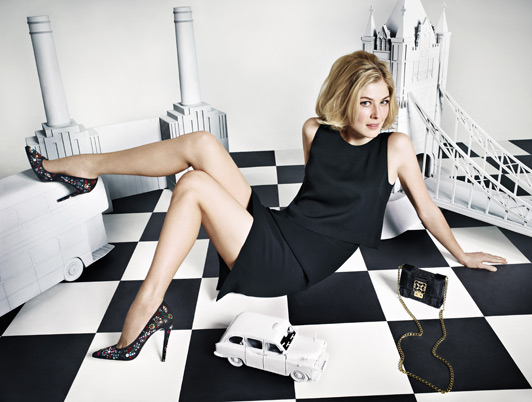 Miniature London is the creative line of the campaign, que celebrates the brand's heritage with its typical British character and that has the same creative team from the Spring / Summer campaign 2013: the renowned photographer Mariano Vivanco and stylist Cathy Kasterine. The collection is inspired by the influences of the sixties and the look of Diana Rigg in the movie The Avengers. In the five main images Rosamund appears surrounded by some of the great architectural symbols and cultural icons of London, reflecting in new and old buildings the modernity and traditional British elements of the designs.

In addition to his work on the campaign, Rosamund has collaborated with L.K. Bennett in a bag collection to be launched in the UK, United States, Francia, Spain and at lkbennett.com. The campaign will be published in the September issues of magazines such as Harper’s Bazaar (UK and USA), InStyle (UK and USA), Vogue, Tatler, Elle, Red y Marie Claire.

The Black Ribbon campaign, photographed in black and white, is a continuation of the creative theme that reflects the clearer lines of the capsule collection. It will be available in select stores in mid-September during London Fashion Week. The Fall / Winter Collection 2013 and Rosamund's capsule collection is now available in stores and at www.lkbennett.com.

"The natural style, warm and witty from Rosamund perfectly embodies the British spirit and modern attitude of the collections. We are very happy to work with her again., especially to honor our British heritage with a touch of humor through the concept of Fall / Winter images, Miniature in London”. Didier Drouet, CEO L.K. Bennett.

Rosamund Pike has quickly become an internationally recognized multi-faceted actress, both on stage and in cine. Pike just finished production on Edgar Wright's comedy, The end of the world which will premiere in London next 10 July who will star alongside Simon Pegg, Nick Frost y Martin Freeman. This film follows in the footsteps of Shaun of the Dead and Hot Fuzz and will be released in the fall of 2013.

Pike starred in the movie An Education, nominada al Lone’s Sscherfig’s academy, with Peter Sarsgaard and Carey Mulligan. With a great reception at the Sundance Film Festival in 2009, An education garnered critical acclaim plus a Golden Globe, a BAFTA and an Academy Award and was honored with the award for Best Foreign Film at the Independent Spirit Awards. Pike has been recognized for her work directing British films. Her portrayal of Jane Bennett in Joe Wright's Pride and Prejudice ,was acclaimed by fans and critics alike, and earned him several nominations for various awards.

With leading roles in the cinema, Pike continues now returns to the London stages. He starred in the Gaslight at the Old Vic Theater in Patrick Hamilton's Victorian thriller, the Wyndham Theater's Madame de Sade vs. Dame Judi Dench production, and the Royal Court Theater production of Hitchcock Blonde. With its enormous success, the play moved to the Lyric Theater in London's West End. Pike started in 2010 starring in the British touring production of Hedda Gabbler, for which it received rave reviews. Lives in London and in April 2012 gave birth to her son, Solo.