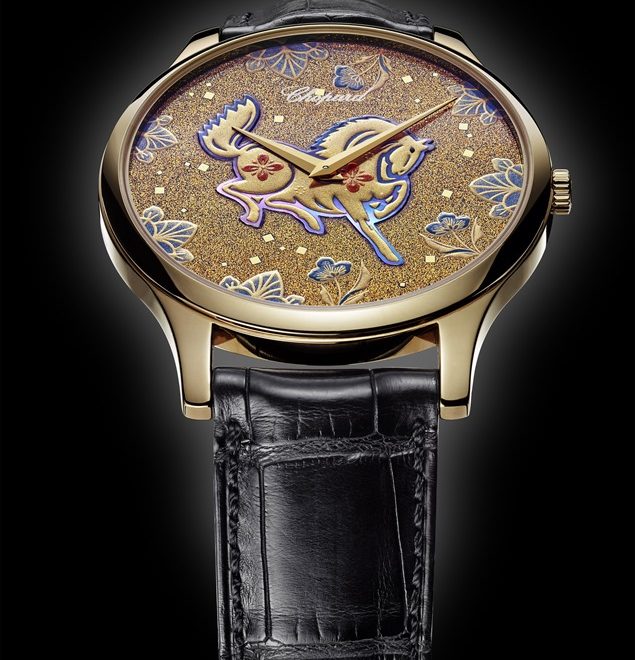 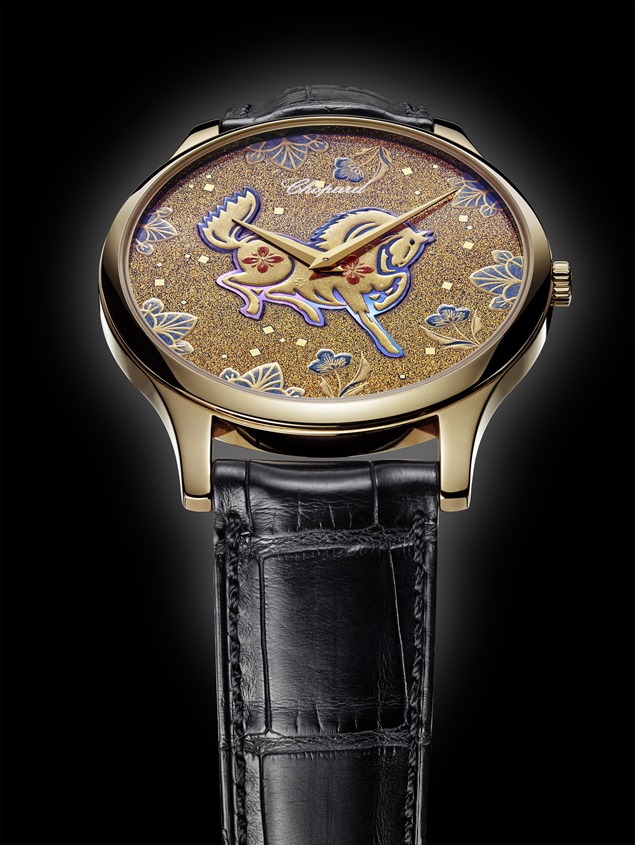 The quintessence of the ancient Japanese art of Urushi, together at the highest level of Swiss watchmaking: this would, in a nutshell, defining the new LUC XP Limited Edition 2014 “Year of the Horse”. Their sphere completely painted by hand in the traditional Japanese technique, It is a tribute to Asia and conclusion of the Year of the Horse in the Chinese calendar. It represents a horse leaping decorated with lotus flowers. A plant symbol of personal satisfaction to because their ability to grow impeccably from the muddy waters where it has its root and blossom light.

The horse is the seventh sign of the Chinese zodiac, formed by 12 animals, He enjoys traveling to new horizons, a free spirit with a nomadic soul. Chinese ancient wisdom he considered to have a strong attachment to family and values ​​which is itself the cause of its weakness. Tradition also says that people born during the year of the horse are generally characterized by their devotion, energy and creativity.

The Urushi is an ancient art of lacquered. The lacquer is obtained from the sap of a tree, the Urushi, also called "lacquer tree" or "Japanese lacquer", which it grows mainly in Japan and China. Collecting the resin, that is somewhat similar to the hevea rubber, It can only be carried out once a year, and in very limited quantities. Once elapsed between three and five years from collection, the resin is subjected to a treatment which will make it very resistant lacquer, of honey consistency. This is applied in successive thin layers, and traditionally objects of everyday life as bowls or boxes.

Maki-e art is a technique consisting sprinkle Urushi, on the lacquer already applied, metal powder, in this case gold, in order to emphasize the reasons which have previously been drawn on the film surface. The gold dust is applied through bamboo tubes and small natural hair brushes, to draw very fine lines. This art requires significant know-how and extreme meticulousness, today only some teachers dominate Urushi.

Such masterpieces could not better be highlighted by the refinement of the LUC XP. This extra flat watch, sovereign elegance, diameter of 39,5 mm, with a thickness of only 6,8 mm, It is the symbol of watchmaking Chopard. Conceive and produce an automatic mechanical movement, equipped with two barrels for a power reserve 65 hours and able to integrate such a thin case, It is quite a feat.

The watchmakers of Chopard Manufacture in Fleurier have achieved this great success thanks to a clever construction that incorporates a micro-rotor off center. Completely decorated by hand by artisans of the House, according to the canons of traditional fine watchmaking, LUC Calibre 96.17-L can be seen through the open bottom of the case rose gold 18 Carat. Mounted on a black alligator strap, the L.U.C XP Limited Edition 2014 “Year of the Horse” se entrega en un estuche especial, also it decorated using techniques Urushi. Black gold outside and inside Maki-e has an octagonal shape, the symbol of joy in the East, y se cierra por medio de un cordón de seda.