This summer I have signed my next iconoclastic shirt. A recent line of shirts, clear new season, Zara has made honoring classic films of James Bond will be the first thing I bought as salary Release. 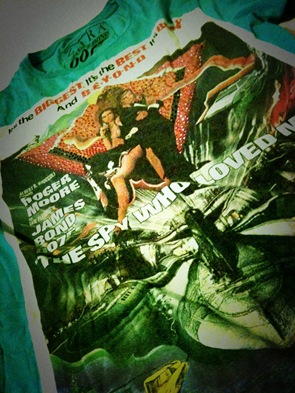 Can not help it, I am a regular at supposedly iconoclastic shirts, either with film references, technological or simply iconic images as shields, logos (no clear Agents) or drawings and prints.

This post of the straw that breaks the camel, with a series of shirts, shows that I have taste when choosing them (any resemblance between me and the blogger is pure coincidence Drop There are days that I feel Bond or other that I have wanted to be "a rock star" and this can not miss me a guitar. Digamos que I conceive shirts as a way of "fun", without giving too much importance to'What, but to how, tried that are comfortable but not stop being nice and foremost, friendly.
I get the feeling that the use of images, icons, etc is a recurring element in defining design parameters, not only as loyalty and brand image, but as creative proposals… Nothing new then have year after year some proposals Oysho Woman Secret or if not by the icons that flood their shirts and comfortable in your pajamas and underwear (Mafalda, The Pink Panther, and a long list of examples) Also the most renowned designers like Dolce and Gabanna be glorified, even more if possible, Marilyn Monroe Printed fronted her in her dresses in past seasons.
The power of an image, de una way, a position or a reference can be instrumental in establishing the particularity. And they have realized that young and new designers who make the "current myths" that are taken as an aesthetic reference, but it is going beyond dress how he or she, but they want to take their picture printed on your clothes. The other night, but Cream Fields Andalucía, I was surprised a funny shirt with a classic photo of Albert Einstein's face on which the pink ray serigrafiaba made famous by Lady Gaga as a makeup bowieano.
Por ejemplo, Yatt case shows how ídolos de masas actuales pasan a ser imágenes gráficas a ser representadas en objetos de moda. But not only the design of famous lives, has also been known recently that, por ejemplo, Zara, He has "plagiarized" drawings and images of famous bloggers to stamp or represent them in their own designs. ¿Hasta dónde puede llegar la familiaridad de un icono al ser representado? ¿Dónde está el límite entre representación, plagio, coger ideas o fusilarlas? Yo no lo sé todavía, pero si alguien quiere hacer una camiseta con el señor de las glasses yellow, que me lo diga, que me retoque antes!
CamisetaDolce and GBJames BondMarilyn MonroeOyshoWoman SecretYattZara
by Yellow Glasses
Leave a comment